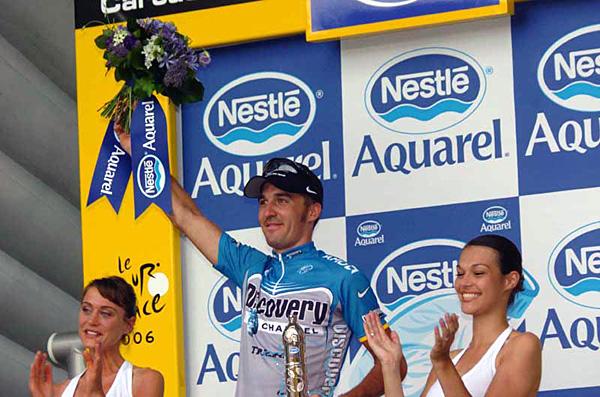 Yaroslav Popovych was born in Kalinov, Ukraine, 40 miles from the Polish border, on January 4, 1980. He is the eldest of four, is 5’9” high and weighs 161lbs. His father managed for a long time a farm. Yaroslav’s favorite number is 13. His favorite color is the black.

In Ukrainian the word “Popovych” means the son of the priest (in the Orthodox religion unlike in the Catholic, priests can get married).

He was offered his first bike at age 5 by his grand-father Mikhaïl, and started to ride at 12 at the Kiev track race school.

At age 15, he joined the sports school of Drogobych. Most training was done on the track although he preferred the hilly surrounding region. There he made the acquaintance with a gang of friends with whom he did a few road racing.

Although his home town is located in the foothills of the Ukrainian mountains, Yaroslav could never ride in the mountains neaby since only two roads cross the range : one of them is unridable because it’s not maintained, and the other is choked with truck traffic.

At age 16, Yaroslav was selected to join the junior national team. A year later he crossed for the first time his country’s borderline to race abroad.

While training, he carried on with school studies on a daily basis. Ukrainian TV did not broadcast any bike racing and the only information he got on cycling were from video cassettes lent by school mates. Likewise, articles on cycling were not covered by newspapers.

Having experienced poverty and proud to be an Ukrainian, when Yaroslav wins a race it’s for his country and his family.

At the end of 1999, Yaroslav joined Vellutex, the best amateur Italian team, thanks to Victor Osadchi, his manager within the national Ukrainian team. He was surprised to discover the nice Italian bikes because in Ukraine, at the junior level, there were not enough bikes and the young riders had to share 6 or 7-year old bikes. Only the older riders got to have their own bike.

Upon his arrival in Italy Yaroslav got to know Ernesto Colnago and they became very close friends. Whenever Yaroslav returns to Ukraine, Ernesto always gives him some equipment to distribute to the young riders there. Yaroslav tries to help Drogobych cycling school.

Yaroslav Popovych left his country because cycling is his life. He therefore decided to aim to win the grand tours and other races in order to help his parents, Pavel and Maria, who stayed behind in Ukraine and who never totally understood why he left.

Up till the time he arrived in Italy, he did not think that cycling could one day become his job. He soon realized all the work he would have to perform to become a professional rider because Italian cycling was totally different to the level in Ukraine.

While still an amateur he was nicknamed “Merckx”.  This young extremely gifted Ukrainian, climber and all-arounder, won everything.  No classic race has escaped him: 17 victories in 2000, and 22 in 2002, including Paris-Roubaix (in 2001), the Tour of Italian Regions (in 2001) (the most important race for the amateurs) before Scarponi and Cunego, the Tour of Val de Aosta, the world cup (in 2001) and the World Championship in Lisbon (in 2001).

In 2000 he ended up second in the U23 Road World Championship just behind Evgeni Petrov (Russia) and before Lorenzo Bernucci (Italy).

His first important results were a 1st place win in the 2001 U23 Road World Championship before Caruso (Italy) and Grychenko (Ukraine). 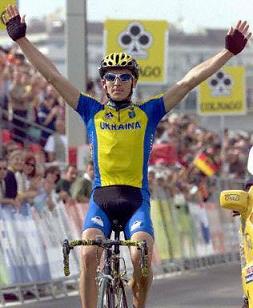 In 2002 he joined the Landbouwkrediet-Colnago team, where he won the Geneva, Switzerland Grand Prix,  and the Croatian Trophy 2.

Yaroslav is a traditional rider.  He has a quiet life and alternates periods of  training and rest.  “One day he will win the Tour de France” said Ernesto Colnago, the most famous bike builder in the world. 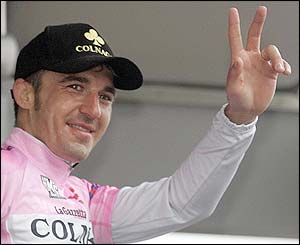 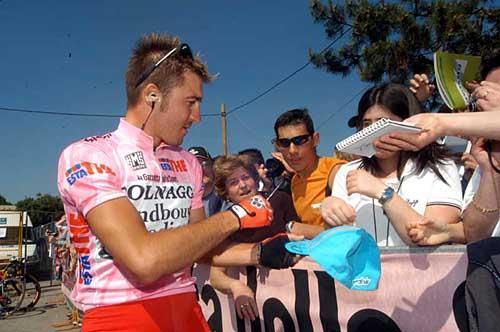 In 2004, Yaroslav won the Androni Giocattoli trophy and a 5th place overall in the Giro.

In 2005, Yaroslav together with his friend Volodymyr Bileka, joined the American team Discovery Channel.  Yaroslav signed a three-year contract and Bileka a one-year.  This same year, Yaroslav won the Catalogna Grand Prix and ended the Tour de France wearing the white jersey for the best young rider under 25, after working very hard in the Alps and the Pyrenees for his leader, Lance Armstrong.

Over the past years, this 26-year old rider got three times excellent results in the Giro, ending 3rd overall in 2003 en 5th overall in 2004.

On his first season as a professional in 2002, Yarolav earned a reasonable 12th place overall in the Giro. 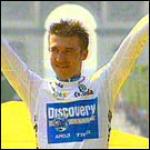 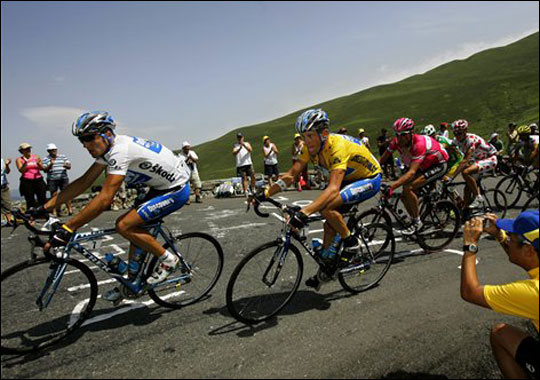 In 2006, Yaroslav joined the Tour de France team where, taking advantage of a breakaway, he won the stage from Luchon to Carcassone. 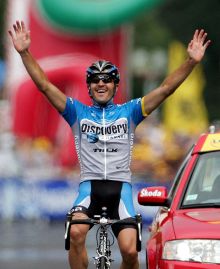 He also tried his luck in a breakaway in the stage from Bourg d’Oisans to La Toussuire but unfortunately was  caught up by the peloton.

After the Tour de France, he took part in the Tour of Benelux, helping  his leader George Hincapie.  He also did the Plouay classic race, where he finished 4th behind Nibali, Flecha and Mori. In 2007 Yaroslav joined the Paris-Nice race where he won the Manosque stage after a 30-kilometer solo breakaway.   His team mate Alberto Contador won the overall general classification while Yaroslav ended 20th.

Yaroslav took part in Milan San Remo where he launched an attack, together with Franco Pelizotti and Andreas  Moletta (who suffered a fall in the descent), and ended up in 24th place

He also participates in the Tour de France, where, he was finished on a magnificent 8th place to the general taken away by his team-mate Alberto Contador.

Following the stop at the end of 2007 of the Discovery-Chanel team, Yaroslav Popovych comes to sign a new contract of 1 year with the team Silence-Lotto. He will be followed of his friend and team-mate Volodymyr Bileka.

At the beginning of the year 2008, he participated at Paris-Nice, where he finished 3rd, behind Rebellin and Nocentini. 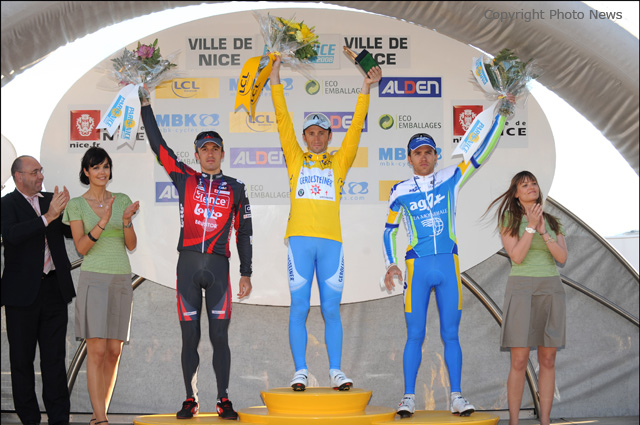 In 2009, Yaroslav signed with the Team Astana. During the Tour de France, he wins the team-time-trial of Montpelier.

Year 2010: Yaroslav signs in the team Radioshack and takes part in particular at the Tour de France beside Lance Armstrong.